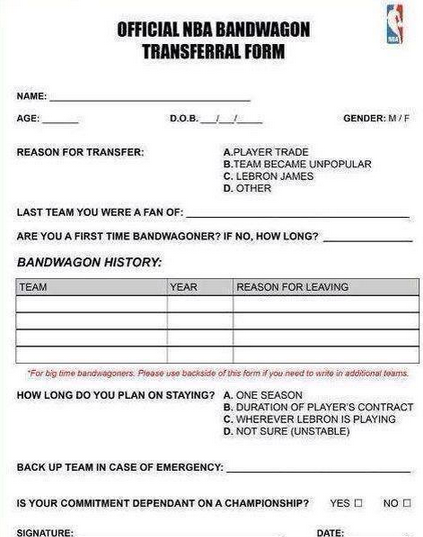 The rift between the longtime, hard-core fans and the…”Oh, this team starring the Splash Brothers, with The City printed on their uniforms and 4.4 million followers on Instagram are winning now”  aka, “casual fans” of the Golden State Warriors has brought the polarized topic of Bandwagoners’ to the forefront.

When you hear the term ‘Bandwagon’ what is your first reaction?  Do you scowl? Do you think of someone or a group of people you know? Do you think of all the team flags suddenly appearing on cars that you didn’t see a year or two ago? The feelings you get when you find out how much it cost just to sit in the nosebleeds, all because the team has a winning recored now.  The feelings are real; Anger and frustration, long time fans going on emotional tirades about how long they’ve been supporting their favorite team. “I was here when we sucked.” Or “Where were you when we were losing?” This is a subject I’ve wanted to explore for a long time. It’s also  a subject that is a personal one for me, growing up in Oakland, and supporting ONLY Oakland teams (Warriors included), through all the ups, but mostly downs. Dealing with people who can’t name more than three players on a team can be difficult. Recently, I started wondering if maybe I just take sports too seriously. Am I cutting my life expectancy shorter, by stressing over if a Millionaire, whom works for a Billionaire, will make a shot or score a touchdown. Or maybe I’m just passionate about something that brings people together, and creates a bond with total strangers in a 3 hour time span, over a game that is symbolic of life; with all the ups & downs.

If you’re a causal fan, you probably don’t get why someone may be so worked up over a loss. “You act like you really know them.”  I’m sure all real fanatics have heard that line before. “Matter of fact, they don’t even know you exist.” Or my all-time favorite, “They don’t pay any of my bills!” That may be true, but rooting for my team(s) is something that has been a part of my life since I was about 8-years old. I credit it with saving my life, and keeping me out of the streets. Personally, I cared a lot more about watching  the Bash Brothers at bat or watching Rickey Henderson steal bases than hanging out on the corner. Bo Jackson was more interesting than anything going on outside. Deep East Oakland was rough, but I didn’t care, Tim Hardaway was shattering ankles, Chris Mullin and Mitch Richmond was (by early 90’s standards) raining threes, as long as I had sports, life was good. But, just like the dynamics of your life,  things change. Run TMC broke up, Mark Mcgwire and Jose Canseco were gone, and the Raiders came back home in ’95, started out hot, and then went Raiders on us. Most of my life revolved around watching, talking, researching, and bonding over sports. What subject gets men talking like they’ve known each other for years, when all else fails? Sports. “Did you see the game last night” has been muttered to me so many times in the most random of places in my life. It used to be a welcoming ice breaker among guys who normally would be to busy acting macho to talk with a stranger. However in 2016, that same question is mostly being asked by someone trying to fit in and sound cool. Reciting every sound bite he heard on the 4-letter network the night before.

I blame social media for the shift in quality fan banter. Everything feels soft and forced. Too many regurgitated sound bites, mixed with politically correct bullshit, from people more concerned with getting likes on Facebook than being a real human being, with their own original thoughts. Frankly, I feel like the real sports fans experience is being gentrified. It’s being replaced with the, organic-free range-cage free and grass-fed-everyone gets a trophy experience.  The kinds of people who not only drive up rents in a city near you, but drives up ticket prices at (insert arena) because the team is now winning. The urge to be cool takes over because the potential for likes could go up exponentially with a selfie at the game.

All the years I spent watching Warriors games in the leanest of years, made me question my sanity sometimes. I can vividly remember being openly laughed at in the Bay Area for my love and support of the team. Hats, jackets, and jerseys. Blind faith in a team, that had been cellar dwellers for the majority of my life. Every year watching the draft intently, with the kind of hope in my eyes my dog has when I’m eating. Watching all the failed trades and tired rosters filled with players just collecting a check. Golden State used to be where your career either began or came to die. Over the years I had to watch roster moves that felt more like stabs in the dark. Mookie Blaylock, John Starks, Mugsy Bogues, Billy Owens, Chris Gatling, Bob Sura, among countless others. I’ve witnessed a lot of terrible basketball, and quite a few seasons when I, along with other hardcore fans, would have been excited with getting to .500. Because that means hope! Remember the young core of Jason Richardson, Gilbert Arenas, and Antwan Jamison? That never materialized but I lived and died with that squad. If you’re old enough to remember the ’02 NBA draft and weren’t upset about Mike Dunleavy getting drafted #3 you’re not a Warriors fan. And if you weren’t pissed off that Chris Mullin gave him $55Mil in ’05 go in your closet and grab your Lakers jersey and put it back on. Or whoever you used to support.

Maybe it’s silly to be upset with ‘Bandwagon’ fans. Maybe they’re just newcomers to sports. Maybe they were too busy with school, making something out of themselves, maybe they just like a good time being social with friends. Maybe, just Maybe some of us take sports much too seriously. As the old adage goes, everyone loves a winner. Humans have a tendency to personalize things, and we live in a age where everyone is easily offended. However we also live in a society where everything is watered down, and you are made to feel like you live in a bubble. Shit, they took dodge ball out of school. Some schools have banned the game of tag, so kids will never feel singled out or “it”. God forbid you’re “it!” So I also understand where some may feel like sports is all we have left  when it comes to  toughness, and seeing high level competitive gamesmanship. Some may argue, football, as well as basketball has gotten soft. There is truth in that. LeBron couldn’t have played in the 80’s and 90’s in my opinion. Not with all the complaining and flopping he does. Casual fans would’t understand, but I don’t expect them too. A game is just that to them, a game.

Arguments, and real fights have happened over who has been supporting a certain group of millionaires longer, and who’s group of millionaires are better. We spend our hard earned money from regular jobs supporting strangers we pretend to know, and a lot of fans shouldn’t put these guys on a pedestal. If you went in the hospital tomorrow, would your favorite athlete shell out money to help you out, the way we shell out money to see them for 3 hours? No. They don’t even know you exist. Maybe as a society, we should care more about teachers. They are the ones helping to shape how your kids see the world when you’re at work. Fire fighters save lives. Athletes only entertain us. America is a celebrity obsessed country, and living vicariously through someone popular, is currently America’s favorite past-time. So hey, maybe the bandwagoners are on to something by not caring as much…..Or Maybe the love for sport is so ingrained in the fabric of our lives, that this just may be the evolution of what it is to be a fan…. Technology provides us with plenty of distraction… Or, maybe the passion has just naturally died down. Food for thought.

Sunday, the Golden State Warriors take on the Cleveland Cavs in Game 7 of the NBA Finals. One of these two teams’ bandwagoners will pick up some extra passengers, and the other will lose useless baggage.