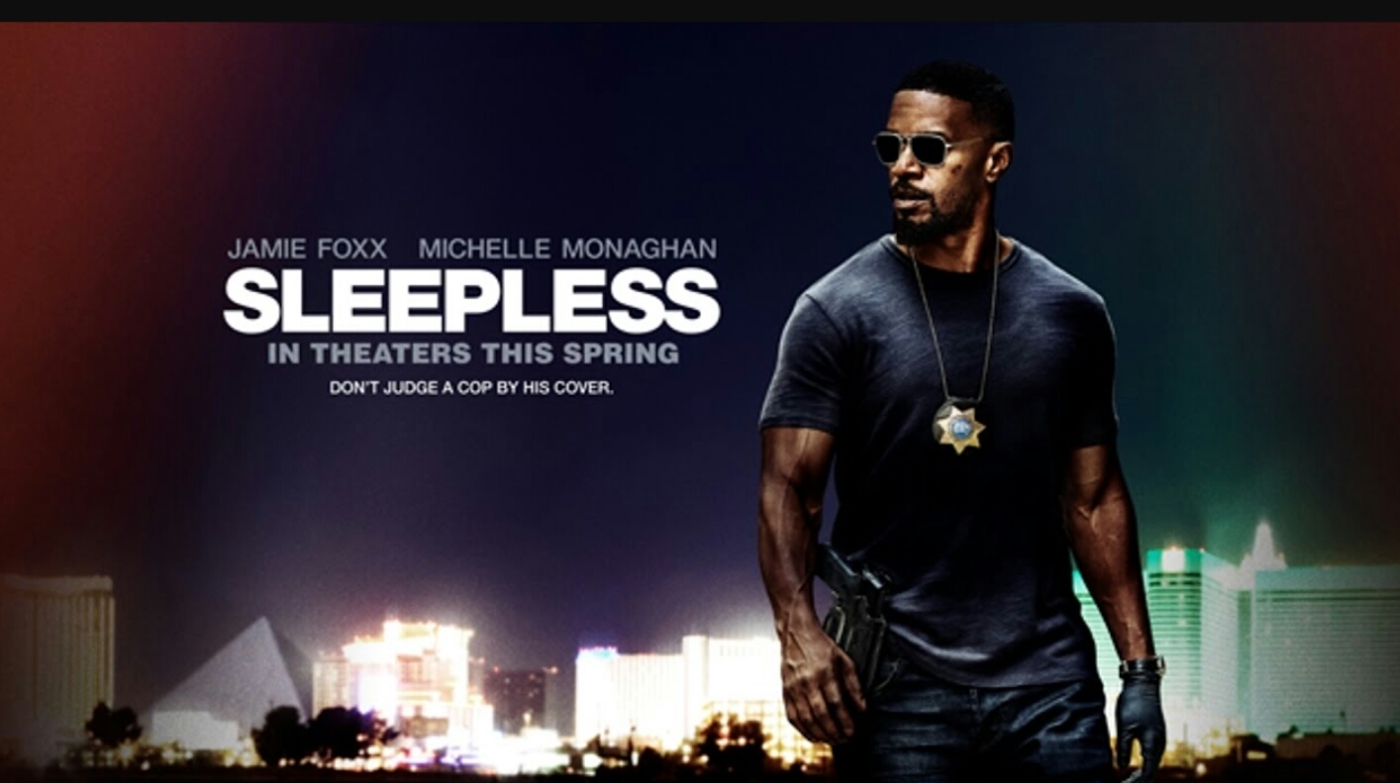 Ok sooooooooooo. Sigh. Despite getting free popcorn and sneaking in my usual Mike and Ike’s, I was annoyed at this film. Let’s get right into it. Jaime Foxx stars as Vincent Downs. A divorcee, single father who is a cop for the Las Vegas Police Department. The movie starts off with a bang. A heist. Vincent Downs and his partner and best friend for 20 years Sean Cass (T.I.) are chasing down some guys and immediately starts shooting and ramming their cars. Cass had info on a “drop” containing 25 kilos of cocaine. They end up killing 2 guys and Downs takes a bullet to the face. (What bothered me is he just had a scratch where he was suppose to get shot at, like a knick or a graze).

Las Vegas PD is swarmed with dirty cops and it’s up to Internal Affairs Detective Jennifer Bryant (Michelle Monaghan) and her partner Doug Dennison  (David Harbour) to clean it up. Bryant‘s mission is to prove that Downs and Cass are dirty cops. Meanwhile Downs work has made him an absentee father. His ex wife Dina Smith (Gabrielle Union) who is a nurse, has no trust in Downs ability to co-parent, so she breaks the news to him that she is getting married to someone else. Downs is frustrated and he leaves Dina‘s work at the hospital with his son Cortez Downs (Markell Watson). En route too Cortez‘s game, they are ambushed, Downs is stabbed in the stomach and Cortez is kidnapped.

Downs receives a mysterious phone call from Stanley Rubino (Dermot Mulroney) a casino manager at the Luxus casino that his men has his son, and that the shipment of cocaine he took was his very own. Frantically Downs goes back to his precinct and patches himself up, only to confront his partner Cass for putting his son’s life in danger. Cass claims he didn’t know who the drugs belonged too.

Meanwhile Downs goes to the casino for the exchange only to lose 23 bricks. He hid 23 bricks in the men’s room only to have Detective Bryant retrieve it. She calls her partner Dennison for assistance.

At this point of the movie I am bored. Like I started looking at the curtain patterns.

Ok anyways, it is revealed that the coke wasn’t Rubino‘s. It belonged to a mob family named the Novak‘s and they are the typical crime syndicate. Rob Novak (Scoot McNairy) is the spokesman/son of the Novak syndicate.

Long story short, Detective Dennison was the mastermind of all this and Jaime Foxx was really deep undercover for 2 years in Internal Affairs.

There I saved you 9o mins. Lmfao. This movie was so clichéd and Jaime Foxx stunk this movie up. He is not believable as a police officer and the chemistry between everyone was real herky jerky. No authenticity whatsoever. Movie gets a D-.

BTW THERE WILL BE A SEQUEL TO THIS BS