As we all know by now, anyone who attains fame is adored. Worshipped even. People will hang onto your every word, with that goofy look on their face, as if you’re really touching their heart.

In my armchair-psychologist opinion, it has everything to do with the insignificance one feels about their own life or accomplishments — or lack thereof. Something can be said about someone who works harder than everyone else to become good enough to “make it,” and vice versa.

For those who haven’t thought much of themselves since childhood and never went for any of their dreams because of it, are usually the ones who buy up every tabloid, watch TMZ, or consume all this television, that makes up this celebrity obsessed country. While the rest of us wonder, “who the hell are these people?!”

For example, President Trump can say whatever pops into his head, and his supporters will run with it, like God himself came down and delivered the message. Famous people are treated as if they are saviors all because they have wealth, and TV makes heroes out of people usually because of their money.

Yesterday, Donald Trump had this to say about Colin Kapernick,

“There was an article today … that NFL owners don’t want to pick him up because they don’t want to get a nasty tweet from Donald Trump,” the president said. “Do you believe that?”

“I said, ‘If I remember that one, I’m gonna report it to the people of Kentucky because they like it when people actually stand for the American flag.’”

Then the crowd went nuts, as if they were under a spell. As if it were the greatest thing ever said.

Let’s be clear about a couple of things: For starters, the combination of Kapernicks lack of quarterbacking ability, i.e. his lack of accuracy, lack of touch, and his inconsistency is the biggest reason for his current unemployment. However, someone will sign him. Mark my words.

Secondly, the first amendment right that is supposed to be enjoyed by all Americans really only applies to those who are adored by the media. Meaning if you are someone the mainstream media doesn’t give a shit about for any reason, they have the power to vilify you. Have you forgot about the Malcolm X quote: 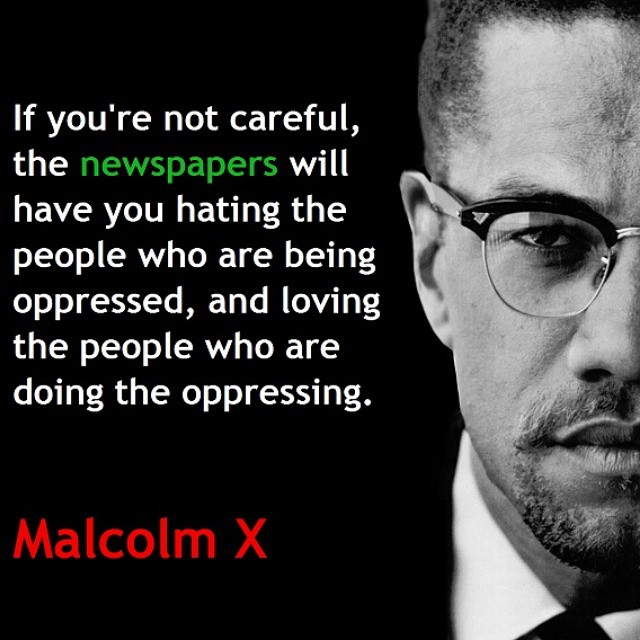 So while you’re on your $1300 laptop, sipping your, $10 coffee, while cyber stalking people that have a fake better life than yours remember this: Flint still doesn’t have clean water, the president still doesn’t know what he’s doing, that celebrity you are told to worship, probably hates their life, and the people who’s land really belongs to, may be extinct before your grandkids are grown.✌🏿

17 thoughts on “The Winning team”